Home > About Us > News Paper Article 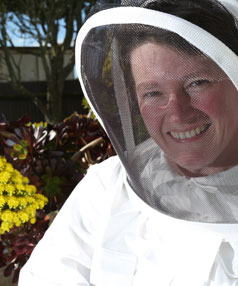 It's annual Bee Week, a time to zoom in on how important these furry insects are to plant survival - and our own. Garden writer Virginia Winder gets the buzz from a couple of bee queens.   Bees alight and lift off a yellow cone flower behind the beekeeper's wife.  She's relaxed sitting so close to the busy insects, which are gathering pollen to take back to their hive.

Fiona Black from Bees-R-Us loves the gentle hum and movement of these life-giving insects. "It's tranquil just watching them go in and out of a hive," she says like a woman talking about watching aquarium fish, or the flames in an open hearth.

But there's a problem behind this serene picture. A big one.

"I got stung on the foot and then I had problems with my breathing - it was like sucking through a straw."
There are a couple of reasons she's so relaxed sitting close to the bees gently humming over the blooms of the Aeonium Schwarzkopf in her mother-in-law's New Plymouth backyard.

She is having regular venom injections to help build up a not-so- dangerous response to stings. "That's equivalent to getting two bee stings a month," she says in a curling Scottish accent.

The other, more obvious reason for her lack of fear, is because Fiona is dressed head-to-toe in a bee suit. Not a black-and-yellow dress-up outfit, but a clean white all-in-one suit with full mesh face mask.

When she's out helping husband Stephen with the hives - they have more than 1000 dotted around Taranaki - she adds gloves to her garb.

"I don't take any of my gear off until I'm in the truck and know there are no bees there."

It was Stephen who became interested in bees. After working in the oil industry in Aberdeen he returned to New Zealand with a wife and to a 1.2-hectare property they'd chosen earlier at Uruti.

Then when the couple they bought the bees from decided to give up their hives, Stephen took all 147. "At that point I thought it was getting a bit serious," Fiona says.

But that was just the start and she has since become his "gopher".

About three years ago, Stephen, an electrician, had the choice to work offshore or become a full-time beekeeper. He chose the bees.

The couple's three children have grown up around the bees. Callum, 11, enjoys mucking in and helping his dad, but the girls, Eila, 13, and Ishbel, 8, aren't so fussed. They'd rather help with labelling and stuff in the shop.

That could be because Eila is like her mum - after seven stings she began to have allergic reactions and has just finished a course of venom injections. Callum follows his dad and has no problems with stings. It's too early to know for Ishbel because Fiona doesn't know whether she's been stung yet.

Sitting in the sweet-smelling Bees- R-Us shop, surrounded by honey, melted beeswax and apiary supplies, Fiona talks about the significance of the winged insects.

"Bees are important to the food chain - a lot of the food we eat; bees are needed to make it."
Without bees pollinating fruit, vegetables and plants used for feeding farm animals, and anything that needs seeds to grow, the world would starve.

So the more people who have hives, even in town gardens, the more bees we get and, therefore, more food.
Bees are dying out all over the world because of the varroa mite, American foulbrood disease and the use of insecticides.

Hives need to be inspected regularly and if there's any sign of the highly contagious foulbrood, which turns bee pupas into a smelly mush, the hives and all associated equipment have to be burnt.

The mites are now part of life and are in every hive, Fiona says.
"You can't get rid of them."

But there are ways of controlling the pin-head-sized pests by culling drones and using an eight-week treatment using mite strips. When they are put into hives during August and September, these strips help knock back the number of varroa. The strips are taken out before the honey boxes are put on in November.

The mites like to suck the life out of the drones, which take longer to grow. When the boy bees do emerge, they are often deformed. "They might come out with just one wing, so they can't fly and so they die," she says.
Now, we all know about the obligatory "birds and the bees" talk, but after hearing the truth about the latter's mating activities, it's a wonder kids aren't scared off sex for life - especially the boys.

This is how it works.
Let's start with the drones. "Their sole purpose in life is to mate with the queen. When they mate with her, they leave bits behind and that's why they die," she says.
The queen's reason for being is to lay eggs. "She needs workers, who are female, to look after all the other jobs in the hive."

These females do everything - nurse the new bees, make royal jelly to feed the queen, collect pollen to make honey, do the housework and patrol against enemies.
When they are out there gathering food, they are spreading their good work by pollinating flowers.
When it comes to planting flowers, opt for biodiversity, says Bee Week ambassador Lynda Hallinan.
That simply means planting lots of different plants to attract bees. Old- fashioned cottage-style gardens and wild flowers are brilliant for attracting the busy buzzers.

The fashionable easy-care style of gardening, which often includes mass plantings of one variety, isn't particularly enticing to bees. They need a smorgasbord of choice rather than the same food day in day out, she says.
"That is unless it's lavender - the bees love that."

Bees seem to be attracted by any flowers that are blue and purple.
The editor at large for New Zealand Gardener is a bee enthusiast, but she doesn't have a hive on her country property.
Instead, she plants a wide variety of flowers, fruit trees, vegetables and herbs to lure the hive-owning neighbour's 250,000 bees to pollinate her plot.

Her other big message is to stop spraying with insecticides because they also kill the bees.
If you do have to use a spray, choose one that washes off in the rain - not ones that suck the insecticide into them. Also, it's best to spray after dusk when the bees have gone back to their hives.
"My key message is not to spray at all. You kind of get a balance in your garden if you don't use sprays."
Lynda doesn't spray in her own garden, or even lay slug or snail bait. "When you make that your policy you learn to live with a few problems. It's like if you are always taking medication for things, your body doesn't learn to tough it out and it's the same with a garden." She also encourages people to keep hives, even in cities, and learn about bee keeping. In New York and London, there are hives on the roof tops.

Another tip is to put a strip of wild flowers along the side of your vege garden.
For those who really want to brighten up the world and bring in bees, they could plant their roadside verges with wildflowers. Old-fashioned dahlias are another option for pulling in the bees, as are zinnias and sunflowers.
"Flowers your grandparents would have grown," Lynda says.
Planting orchards in the backyard is also another luscious lure.
"It's quite satisfying to go out to the garden and see a fruit tree covered in bees."

She knows that many parents are frightened that their kids will get stung by bees, but Lynda says that when she was growing up there were always bees on the lawn and getting stung in summer was normal for bare- foot Kiwi kids.
Even though she has a son who "blows up like a puffer fish" after getting sandfly bites, the gardening writer says bees are a necessity of life and people need to stop being so afraid of them. Fiona is testament to the importance of braving the brunt of bees - with the help of venom injections and a bee suit.